While I’m in Japan introducing myself to the others. As soon as they realized the I was from Taiwan, 90% of then says they’ve been to 台北 or 九份, and besides that, they don’t know about other parts of Taiwan. Today, I want to introduce another city in Taiwan which have a profound relationship with Japan – 台南 (Tainan).

台南 is a city full of surprises, even for a Taiwanese like me. Let me recommend three traditional foods I like to have while I am in 台南. In 台南, the food is often served in a different flavor. By various flavor, I mean beyond my imagination. In my knowledge, Taiwanese fish soup is usually flavored with salt and ginger. With some extra money, you might get served with some Chinese medicine mixing with it. While I was in 台南 having my fish soup, I just realize that 台南 fish soup is sweet. By sweat, I mean they add sugar to the soup. To enhance the taste of the soup, you need to add some black vinegar. So in the final result, the soup is going to be a bit sweet and sour at some time. Besides the soup, there is a kind of traditional plate called 黑白切 (ヘイ。ばい。チェー). 黑白 in Taiwanese (台湾語、中国語ではない) means arbitrary (気の向くままにすること). So the chief of the shop will just randomly pick some ingredients in his shop and start chopping. Most of the time it’s going to be sausage, white carrot, blood rice cake, some meat or even some random animal’s viscera. It’s become quite famous these days in Taiwan, so there is some chance to have this traditional plate somewhere else besides 台南. 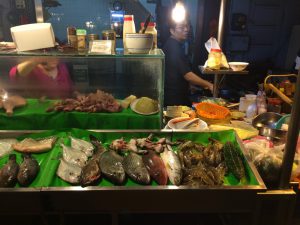 I am not a local in 台南 so I might miss some good plate, but there is one dish that I will not miss –  beef soup. Personally, I like beef more than other kinds of meat I consume. In 台南, you can have beef soup anytime you want. I mean literally, anytime. In 台南, you can have beef soup for breakfast, and you can also have it for lunch, or dinner, or snack. The beef soup shop in 台南 is like 松屋 or 吉野家 in Japan. Maybe for Japanese, the commodity price is low compared to the amount of money you can make, but the price of beef soup in 台南 also make me feels having a real bargain even if I order more than one bowl.

After the food maybe we should talk about the relation between 台南 and Japan. Back in the 50’s Japanese government does a lot of constructing in 台南. There are quite many renovation projects in 台南 which preserve the building by only renovating the interior. The most famous project is a department called 林百貨. It’s the first building in 台南 which comes with an elevator. In 1923, the Great Kanto Earthquake happened, and so the architect of the building design the construction with reinforced concrete. The interesting part of the building is that there is a Japanese temple (末広社) on the roof top. While in the Pacific war, the building was a battleground too. So while you visit the building, you can still discover that at the rooftop, some bullet holes are existing on the walls. Across the 林百貨, there is a bank called 土地銀行; This bank was called 勸業銀行 in 1937 while the Japanese government builds it (清水建設). In 1946, The Taiwanese government decided to reuse the space for the new bank for 台南. And as for the old housing, Most of then has been renovated into the small coffee shop or Cultural and Creative Industry. 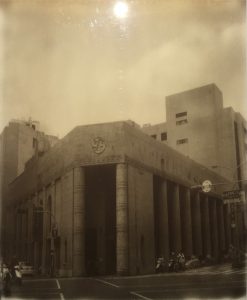 The lifestyle in 台南 is so improvisational, which create so many exciting programs or space in the small alley. It feels like the people who live in 台南 community builds the city together. There are so many in- between areas which happen so randomly, it looks awkward at first, but when you get used to it, it fits in the cities harmony. Some shops in 台南 have to wait till night to appear. Most of them use the void next to the temple while the temple closes at night. People will just grab seats and gather friends and enjoy food while chatting with each other. I’ve to join the dinner with my friend who lives in 台南. That meal makes me feels that I am back to the early day where people knows each other, and neighbor is not anybody but somebody. Even though I am a stranger to the table next to me, but we still had a delightful and enjoyable conversation. This is the amazing part of 台南; it gathers people. 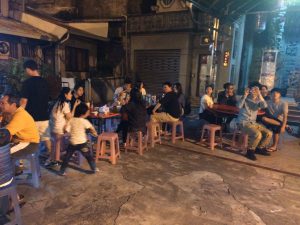 The old housing in 台南 often has an unusual situation of coexisting itself with the environment surrounding them. Such as building the house around the trees. or extend the connection of small gaps between the buildings. If you squeeze through the gap, there is a whole new world waiting for you. 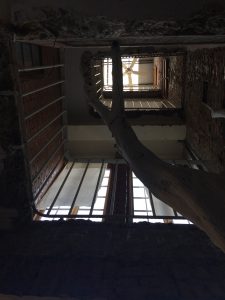 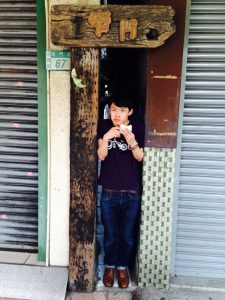 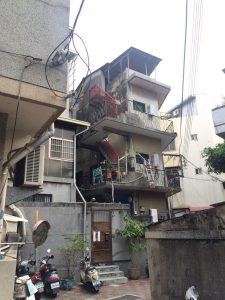 It ‘s nice to have the friend, especially while he is a local and by some chance, he works in a famous architect office in 台南. After informing I’m going to stay in 台南 more than two days. He brings us to his office and let us stays next to the hostel which his office designed. This office adapts to the local custom which created so many in- between spaces for the community to interact with the space they’ve created. 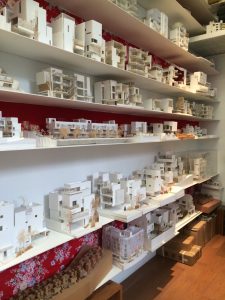 The first floor is the coffee shop which connects to the back alley; the coffee shop is a combination of route and store. Anyone can pass through the coffee shop, but by any chance, you met someone you know sitting in the coffee shop. You may take a sit with him in the coffee shop and enjoy talking to friends or maybe enjoy a cup of coffee. The second floor is the exhibition space, but unfortunately, it was still in a setup situation. The third and the fourth floor is the hostel space which is enough for two families. It’s about 30000yen for one family per day, which means about 7000yen per person. We had a good rest that night and thanks to the waitress in the coffee shop; she gave us the free photo as a souvenir to stay in their hostel. 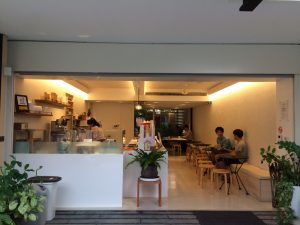 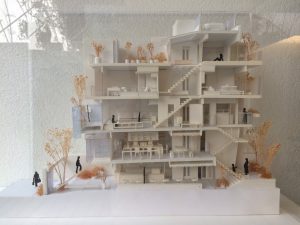 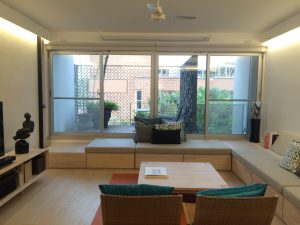 For the people who want to enjoy Taiwan again, I do recommend you to visit 台南. There are too many things in Taiwan which I want to share with you guys.    I’m always welcome people come to Taiwan to travel. Hope this blog helps you a bit with some local place to go while you decide to come to Taiwan. Got any question, leave it in the comment part Japanese, Chinese or English are all welcome! Maybe I’ll share more on the next blog. See you guys soon. 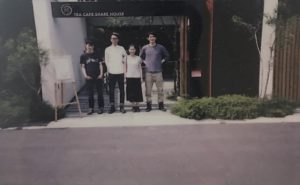